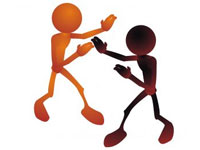 The big Noodles brand confirmed a big business with us. It took weeks of arduous efforts and follow-ups to close this business. We had to go through several rounds of sampling and our guys could not get it right. Just at the point it appeared that the customer is losing interest, somehow by miracle, the production manager submitted the right sample! I must thank my stars.

The big business did not enthuse many. The day the business got confirmed, I contacted the VP to tell about it and to ask to him start production. He just blasted me on phone “sitting in the office, you create confusion….I need to be told 3 months in advance about new orders….you don’t give me any plan…and suddenly call one day and say that the business is booked”. I had no clue what he was trying to say. Does he not want to execute the business? Or is his jealousy over my success speaking?

CEO got very much excited. He was excited so much that he called all and sundry in the factory to work on this order, except VP. Why was CEO avoiding to talk to VP?

The Director congratulated me for this business, but then also instructed me that I should make sure that the order is executed without hiccups. So I was advised that I should ‘sit on the head” of the VP on daily basis. CEO’s lack of communication with the VP and the Director’s strange instruction did hint at something.

On a Sunday, CEO spoke to me on Phone from somewhere from Sonipat. He said to me that he was on a survey accompanied by the supplier RNC. On Monday, when he met me he talked like Sherlock Homes. He proudly boasted that he has discovered a scam being authored by VP in collaboration with the Purchasing Manager.

Soon there were murmurs all around of imminent disciplinary action on VP. I wondered how everyone in the organization is in the know of it. I always thought such things are done in total discretion, since there is a senior manager is involved. While having lunch with one of the ants, I learned CEO had boasted of his investigative skills to everyone in the office. Factory guys do have a couple of eyes and ears in the office in the form of Ants. It must not have taken much time for this rumour to reach VP’s ears.

In one of my daily morning meetings, CEO told me that he is going to meet the Chairman (The man who owns the company!) in the next few days to brief about VP’s activities and get sanction to remove him. Can’t the Director himself give him that sanction? I asked him. The reply was: If anyone above the Manager level is to be dismissed, the Chairman’s formal approval is required.

Next few days, CEO did not turn up. He was hospitalized for some stomach related ailment.

On one of the days when CEO was in hospital, VP came to corporate office unannounced. I heard later (from the Ants) that he had an audience with the Chairman along with one of the Cartel Members. The information was that the Chairman had met with VP for 30 mts and listened to his grouses against CEO’s style of working. It is also alleged that a dossier was handed over to the Chairman, listing the ‘mis-deeds’ of CEO. It was not clear if he had complained against the Director.

The CEO who was recuperating returned to office and went into a huddle with the Director. What transpired from then on is not very clear.

CEO did not call me to his chamber for morning meetings for a few days. Whatever I wanted to discuss with him on business matters were all done over phone. His Secretary mentioned to me that he has sought time with the chairman, but he has not got time. The CEO kept waiting for the Chairman’s appointment.

View all posts by hemgan

This site uses Akismet to reduce spam. Learn how your comment data is processed.